The graph below shows the percentage of New Zealand primary school students learning a second language by language learned for the years 2006 to 2014. 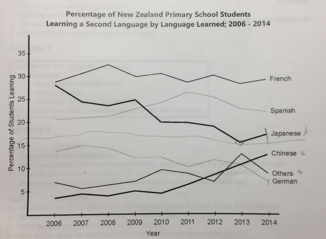 The line graph compares the percentage of primary school students in New Zealand who learned a second language between 2006 and 2014.

Chinese and German were the two least common languages. The percentage of primary students who learned Chinese started lowest at 4% in 2006, but slightly increased to 13% in 2014. German, which was more popular than Chinese in 2006, had gradually declined to 7% in 2014. The proportion of other languages that primary students learned had an upward trend and peaked at 15% in 2013, but plummeted at 8% in 2014.